A group of white men wearing T-shirts, Patagonia fleece vests or zip-front sweaters, Allbirds sneakers, and faded jeans are sitting around a conference table. It is 7:30 in the morning. They are collegial, familiar with one another, and engaged in friendly banter. The senior team turns their attention to their leader who has just walked into the room; he looks exactly like they do. Two women follow him, dressed in the female version of the unofficial company uniform. They are the comms and HR executives. The meeting starts; the agenda is to review recent diversity and inclusion initiatives and try to figure out why so many of their employees are quitting. The leader admits he has no idea why a third of his younger workforce is either losing pace or outright abandoning him. He is convinced he is a role model for a balls-to-the-walls work ethic, logging in longer hours and more weekends than anyone else to deliver on the organization’s short-term goals.

The executive team comes to attention, each with a Starbucks cup placed to the right of their mobiles, which they watch attentively not to miss any texts, emails, or breaking news. The meeting begins.

The HR executive has continued to emphasize the importance of maintaining and maturing a healthy organizational culture. Under advisement of HR, the CEO reached out to his peers at other organizations to learn how they approach their workforce challenges. Each has a slightly different strategy, and the CEO listened more carefully to those he agreed with who brought their workforce back into the office full-time. They, like the CEO, believe that physical co-location provides a firmer control on the work environment and culture.

Accordingly, the CEO announces to his team that he has rejected requests for remote and hybrid work, believing that everyone needs to be physically together in his on-trend designed workplace that is open spaces with no dedicated workstations. He sees physical collaboration as the solution to the quiet (and vocal) quitting plaguing the organization. He also announces that to cut costs, he is eliminating the free coffee and snacks and is converting the yoga space into a storeroom. The CEO felt these perks were a distraction from getting work accomplished according to his timelines.

You might think this scenario sounds like a screenplay for some startup or emerging tech streaming series.  Sadly, it is not atypical of many organizations today, struggling with an outspoken, highly competent workforce, changing workplace values, and the potential implosion of their workplace culture infrastructures.

The top-down approach to addressing issues and problems often comes from a place of comfort and the perception of what worked in the past will work again. And in the case of our CEO, he will unlock a Pandora’s box of problems with his workforce by taking a command-and-control stance in today’s dynamically changing and complex environment.

The past few years have resulted in a society forced to change — even into transformation. This forced necessity to adapt, and change crossed over between personal and professional lives and for many redefined how to navigate life on a day-to-day basis. Prior pandemic, one could argue that we were wound too tightly into conforming to what we considered normal that mirrored what we were taught about how the world worked. Many believed that Type-A, balls-to-the-wall work ethics, achieving goals at any cost (including personal health and well-being) and ensuring every decision contributed to advancing one’s career and accumulating more money was the right approach.

For those that have not yet read The Truth About Transformation, several chapters focus on exploring how William Bridges correlated change to the Grief Curve. A curve refined by others as a Transformation Curve explains how individuals and organizations manage the journey of personal or organizational change. Both the Grief and Transformation Curves represent the different stages that occur through the phases of grasping, internalization, confusion, and ultimately redefining reality that enables acceptance of change.

If you follow the curves; anger, confusion and frustration play strong sequential roles as mental states and emotions in moving towards acceptance. In consideration of the past few years, forced change left many of us without the tools or understanding how to successfully move through the curve towards acceptance of a new reality and therefore a new environment. 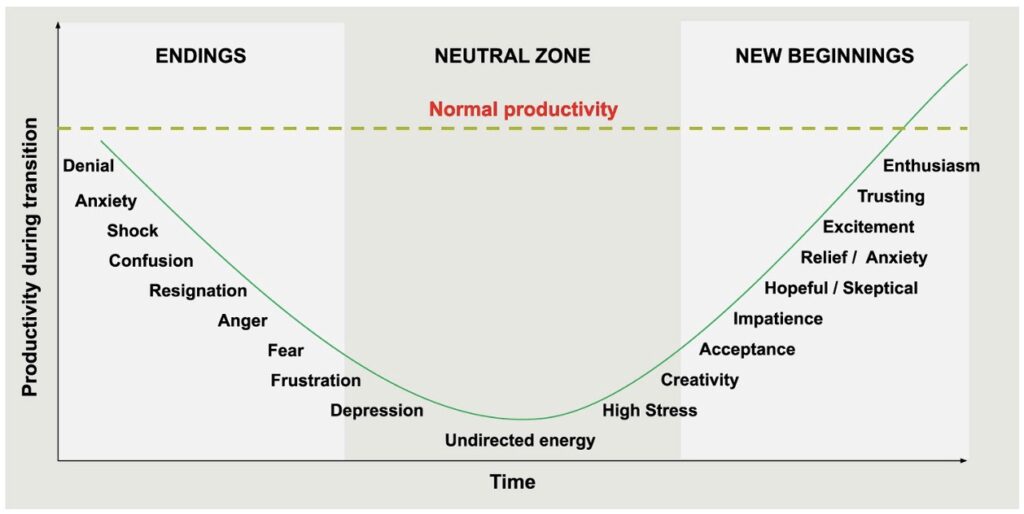 For example, forced isolation, fear of contracting a virus, and confusion about cures forced a dramatic change in the workplace. The residual effects have taken a toll on individual happiness and emotional wellbeing. From a skill-based perspective, the workforce had to adapt to new technologies, practically overnight. When immediate change is required, there is a lag between the new reality and personal acceptance of change which takes considerably more time. Redefining oneself and facing a new normal without any context from the past is a massive challenge.

Disconnected and Out of Touch Leadership

We have often written about the risks of working and living in a state of anxiety and ambiguity about the future. Here’s a take from a millennial data and analytics leader on how these conditions affect performance. “There’s been so much happening with folks…personally and globally. Pandemics, sickness, death, and racial injustice. People carry that stuff into their work. It’s a collective trauma. And that’s 100% not addressed by management. So that hurt and resentment festers within a culture. Then you layer on top of that all the actual business change that’s happening. People are in new roles. Businesses are having to adopt new ways of working and that causes tumult. I’ve been through countless layoffs in years past. Nothing compares to the last 12 months. In February, it will have been three years since we’ve been able to travel for an offsite. So much could be solved by some kind of get-together where we can actually connect on a personal level.”

What’s wrong with this picture? It is the perfect Petrie dish for a dysfunctional workforce and their erosion of faith and belief in an organization. People feel disempowered, disintermediated, and are becoming disinterested. When leadership is so disconnected and out of touch, it is an early warning sign of danger ahead.

The New York Times recently ran an essay on “The Year We Lost It.” Think back on Will Smith on stage at the Oscars. Then fast forward to Nick Kyrgios having a temper tantrum at the U.S Open. And it’s not just celebrities. Many of us are showing less grace under pressure. We are now approaching three years of angry public discourse acerbated by social media and broadcast news that thrive on bottom feeding. According to The Times, therapist Nedra Glover Tawwab chalks it up to  pandemic stress, “We know what the world used to be like. And the world is no longer like that.”

Living with uncertainty typically does not bring out our best qualities. It is a fact, proven by behavioral scientists, that people are afraid of change and resist it whenever possible. Our default is “steady as it goes,” and under the circumstances of facing disruption on so many levels, change is viewed as a potential disaster. The Times adds, “It may have always been naïve to believe that a pandemic would unite our nation. If anything, the past few years have proved just how little we can agree on, including many aspects of the pandemic itself, such as whether it’s over or what might prevent the next one. The one thing we can agree on is that we’re still angry about it — but we can’t even agree on what, exactly, we’re angry about.”

Anger is a residual result of feeling out of control and a way to “override the fear,” according to psychiatrist Dr. Mark Epstein. He adds, “The basic thing is change. People are afraid of change, unsettled by change, and made to feel helpless by random events that are beyond our control.”

The macro reality of the global conversation writ large has had a profound effect on our workplaces. Let’s return to our data executive. The Times reports, “our personalities changed more rapidly than usual during the pandemic, and not for the better. There was a decrease in extroversion, openness, agreeableness, and conscientiousness across the board, and especially among young people.” The pandemic triggered underlying feelings and behaviors, and it has negatively affected our workforce – especially next gens.

The lack of a feelings filter shows up at work with workers on edge. Unrealistic demands with self-imposed deadlines can make once-accommodating employees into rage-filled anti-heroes. Neuroscientist R. Douglas Fields explains “The sustained level of stress and fear you experience every day when you’re under pressure depletes your emotional resources, making you much more likely to get mad, even at minor provocations,” as reported by the Harvard Business Review. And what’s worse, anger can mutate into resentment, which is a game-over psychological and emotional state.

Leadership can take some very practical, non-threatening steps to manage office rage and improve its organizational culture. Some actions are transformational others are incremental steppingstones to a more honest ethos and inclusive culture.

Individuals can take pragmatic steps to face their anger and transition it into a positive course of action.

Learning on the Curve

Society in general is still stuck somewhere on the curve, not yet closing in on acceptance. As a result, individuals remain angry, frustrated, and confused, contributing to a hostile society. And this can seep into the workplace creating a toxic environment. At 2040 we work with leaders to help them recognize that contingents of their workforce may also be angry, confused, and frustrated, stuck with the inability to redefine themselves in the present context.

Forward progress in 2023 requires new perspectives and approaches that respect that the past is the past and new generations with different values and beliefs have the majority of the skills and talents organizations need. And most importantly, this is a slow journey as we are still seeking to understand how to redefine ourselves in a changed world and stay on our path without letting anger derail acceptance.

Get “The Truth about Transformation” 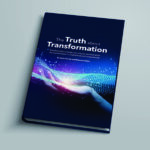 The 2040 construct to change and transformation. What’s the biggest reason organizations fail?  They don’t honor, respect, and acknowledge the human factor.  We have compiled a playbook for organizations of all sizes to consider all the elements that comprise change and we have included some provocative case studies that illustrate how transformation can quickly derail.

Order your copy today and let us know what you think! 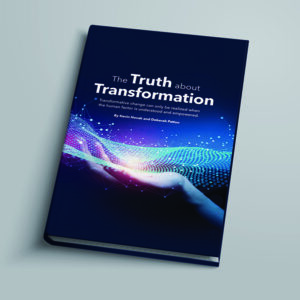 2040 regularly works with clients to help them define their value propositions for different market segments.

To do this effectively, we produce workshops as a cross-functional effort to ensure everyone has input.

We have found that far too many organizations fall into the siloed habit of viewing customer loyalty as another department’s responsibility.

In our workshops, senior leadership works alongside frontline employees to team-create a program that is relevant and responsive.

We start with the customer’s need, then identify current products, programs, services that offer features that meet those needs. We then identify the benefits derived from the features so that these can be communicated to the prospective customer in a way that is meaningful.

And finally, we put this into a marketing message which can be used and further tweaked for marketing outreach.

Get in touch with us to mobilize a fresh approach to ensuring customer loyalty.

We deliver a stimulating experience matched with actionable results!